Honored for their outstanding act of heroism on June 19, 2019

On June 19, 2019, Firefighter Barrett Dorner, Firefighter Ryan Ruiz, Firefighter Paul Neiberding, Firefighter Matthew Riggle, and Officer Anthony Foley put their own safety aside to enter a murky body of water that was an unkempt swimming pool to retrieve a 2 year old child who fell into the pool. The crew conducted a grid search to locate the submerged child. The pool was eight to ten feet deep with zero visibility. They were able to act quickly to extricate the child, begin CPR, and attempt other interventions before moving the child to the squad for transport. When the crew found the child, it was estimated that he was submerged at the bottom of the pool for more than 5 minutes making it critical to act very quickly. After arrival to the trauma bay at the Russell J. Ebeid Children’s Hospital, the team of first responders noted that the child did not have a pulse for approximately 30 minutes.

The true magnitude of this team’s impact comes to light when you consider the outcome of this child. The child showed signs of improvement after being in the Pediatrics Intensive Care Unit for some time and he has a promising future.

First Responders are exposed to a world is a high stress and chaotic environments and we rely on their abilities to make quick decisions and take action. When a child is involved, all emotions are heightened and stress rises. This crew met rose above these challenges and saved a life. Had it not been for these individual’s ability to work quickly and effectively together, the child would not have survived. Commander Lohrbach has been an integral part of the Owens Community College Basic Peace Officer Academy since 1990. He became an academy commander in 2008. During that time, he was involved in teaching and commanding more than 100 basic peace officer academy classes. Commander Lohrbach holds dozens of Ohio Basic Peace Officer Training Academy (OPOTA) Instructor Certifications, including Driving, Firearms, Standard Field Sobriety Testing (SFST), Legal, Ethics and Professionalism, and many others.

Commander Lohrbach is the epitome of honesty, integrity and professionalism. He is always cheerful and willing to share his vast knowledge with other commanders and instructors. Prior to his arrival at Owens, Gayle was a police officer with the Bowling Green State University Police Department (1973-1977), and sergeant with the Maumee, Ohio Police Department, where he served with distinction for over 30 years. He is also a Veteran and served honorably in the U.S. Army’s First Infantry Division in South Vietnam near the DMZ for in 1969 and 1970. Assistant Chief Helminski has been a dedicated steward for this community for the past 34 years. He continues to show his selfless service and dedication to the community. Currently serving his second term on the Springfield Local Schools Board of Education, he continues to utilize his leadership skills to help mold our youth and give back to his community.

Assistant Chief Helminski was instrumental in the development and management of the Springfield Township Fire Department. He served as the President of the Northwest Ohio Fire Chiefs Association and as the Region 1 Response Coordinator for the Ohio Fire Chiefs Emergency Response Plan.

In addition to all of his other responsibilities, Rick assisted numerous departments and organizations to develop Emergency Operations Plans and Active Shooter Guides for their respective organizations.

Through his different roles and responsibilities, he has been instrumental in the protection of our community and personally responsible for saving countless lives over his 34 year career. Honored for their outstanding act of heroism on December 14, 2019

On the night of December 14, 2019 at approximately 23:30 hours Lake Township Fire Department and Auto Aid Departments were dispatched to a working structure fire involving a detached garage on Emch Road in Lake Township. Medic 26 was first to arrive at the scene and reported a working fire with nearby exposures. Engine 28 from Millbury and Engine 27 from Walbridge were in route along with Auto Aid Departments. Engine 28 was delayed due to a train.

Upon resuming response Engine 28 was west bound on State Route 795. An east bound vehicle on State Route 795 pulled over to give the right-of-way to Engine 28. A second auto also going east bound approached the first auto and not breaking ran into the rear of the first auto spinning the first auto around and into a deep ditch on the south side of the road. The second vehicle then veered to the left and crossed into the west bound lane into the path of the responding Engine. Firefighter/EMT Todd Osborne reported the accident to dispatch and shouted to the Engine crew to get out. Upon exiting the Engine, Firefighter/EMT Todd Osborne, Firefighter/EMT Matt DeGroff, Firefighter/EMT Manuel Alvarez and Probationary Firefighter Forrest Wagner assessed themselves for injuries then immediately went to render aid to the other victims in the other two vehicles, six total victims. Firefighter/EMT Devore was unable to immediately exit the truck due to the damage to the left front of the engine but was able to self-extricate shortly after and went to help the others.

This crew was responding to a working fire moments before and they were able to switch modes and immediately help others. Despite being involved in a horrific accident until other Fire and ALS units could arrive at the scene. These five individuals exemplify the Public Safety Services “Others over Self”. Honored for his outstanding act of heroism on February 12, 2019

On February 12, 2019 the Defiance Police Department responded to Karnes Avenue and Avenue in the city of Defiance, which turned out to be a 17 year old female who was stabbed by a male subject. This male attempted to abduct the female as she was walking to school. Unbeknownst to the victim, school had been canceled that day due to weather conditions. The female had fought back against this male and she was stabbed in the side of her torso before escaping his grasp.

The male then fled the scene on foot making his way to a residence on Martin Street. While there, this same male had taken two adult females and two small children hostage at knife point. Patrolman Herbert initially responded to Karnes and Magnolia, he left the scene when the call came in for the Martin Street incident.

Other officers joined Patrolman Herbert to assist. It was determined to make entry into the residence. In response to the male subject’s actions when confronted, deadly force was applied by Patrolman Herbert. As a result, the male subject died. This effectively concluded a high stress situation that had put the lives of others in jeopardy. These actions were judged necessary and justified. Patrolman Frank Herbert’s actions were determined by a review board to meet the criteria for the Defiance Police Departments’ Merit of Valor and Life Saving Awards. Deputy Chief Froelich retired on January 17, 2020 with over 30 years of dedicated service to our community. Deputy Chief Froelich served in many different capacities through his career including a Firefighter/EMT. He was instrumental in the creation of the Community Risk Reduction Bureau, which was formerly the Fire Prevention Bureau. He is a proven leader in his field that has guided many Fire Safety Inspectors as well as Arson investigators. Chief Froelich also sits on the Education Committee and has written articles for various Fire Publications during his career. He is a selfless person and has always placed his comrades and his community before himself. Honored for his outstanding act of heroism on June 8, 2019

On June 8, 2019, Officer Lafferty was dispatched to the scene of an apparent overdose. Upon arrival, officer Lafferty quickly assessed that the victim required immediate first aid. He provided the victim CPR, then gave instruction to a family member to assist with rescue breathing. Officer Lafferty then went to attend to a hostile household member who was experiencing a mental health crisis. This individual was physically interfering with Lafferty’s efforts to resuscitate the victim and threatened to assault/kill the officer. Officer Lafferty kept control of the scene until medical assistance arrived. Officer Lafferty is being recognized for his quick actions to take control of the scene and provide patient care until emergency medical services arrived – while simultaneously using techniques to deescalate and diffuse an intense situation. His actions reflect great credit upon himself and the Whitehouse police department. 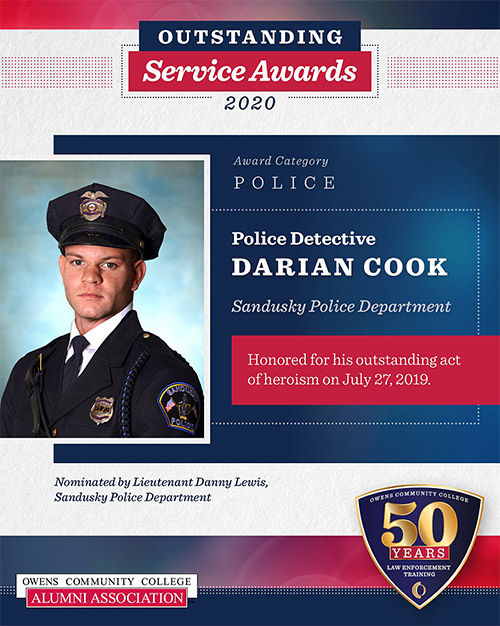 Honored for his outstanding act of heroism on July 27, 2019

On July 27, 2019, Officer Cook responded to a self-inflicted gunshot. Officer Cook arrived and found that a juvenile male had accidentally shot himself in the leg. The wound was to the male’s upper right thigh. Officer Cook noticed the male was bleeding heavily from the injury and it was determined that the bullet had struck the femoral artery. Officer Cook responded by going back to his cruiser and locating a dog leash. He used the leash as a make shift tourniquet on the male’s injury. Because of Officer Cook’s actions of applying a tourniquet to the male’s leg, he was able to slow the bleeding of the injury until EMS arrived. His actions saved the life of the juvenile male.