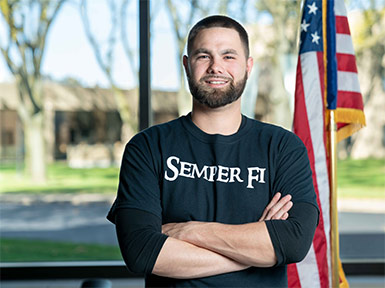 As a Fleet Marine Force (FMF) corpsman deployed with the Marines Corps 2nd Tank Battalion in Iraq, Troy Sherman estimated he treated or saved the lives of more than 250 local nationals and fellow Marines in 2008-09.

The memory he carries with him from his military service is that of his fellow FMF corpsman, Eric “Doc” Dean Warren, who Sherman spent four months training and “teaching everything I know about saving lives.”

Warren died May 26, 2012 on his third deployment with the 1st Battalion/8th Marine Regiment in Afghanistan from wounds received in action due to an improvised explosive device (IED) blast. He was 23.

“I was already medically retired from the service at that point,” said Sherman, 31, a student veteran enrolled at Owens Community College. “I was having a baby boy and decided I was going to name him after Eric. My son’s name is Eric Dean.”

Affectionately called “Devil Docs,” FMF corpsman have been attached to Marine units since the Spanish-American War in 1889. Marines are nicknamed “Devil Dogs.”

Sherman enlisted in the Navy in 2007 after graduating from Springfield High School, following in the footsteps of many members of his family who also served, including his brother, William, a Command Master Chief in the Navy.

He spent his entire career with the Marines as an FMF corpsman and retired with the rank of Hospitalman. He said his medical training prepared him to serve others in Iraq, including treating local nationals and their general health care needs as well as combat injuries that were more significant, whether it was for Marines or Iraqis.

“We might come into a village that was hit the night before by insurgents and it was our duty to help,” he said.

After retiring in 2012, he moved to Shawnee, Oklahoma to live with Warren’s parents, Donna and Marvin Warren, Jr. The timing was just after Eric Warren was killed in action.

“There was not going to be a lot of help living in Ohio with my son and they loved and adored him, so inadvertently it became a healing process for all of us,” said Sherman, a single father who remained in Oklahoma until earlier this year.

While in Shawnee, he took classes at the local community college, Seminole State College, for three semesters.

“I was not good in school growing up. After the military, something changed in me and my focus was different. I transferred to Owens with a 3.6 grade-point average,” he said.

At Owens, Sherman is among more than 700 student veterans, their spouses or dependents utilizing VA benefits and attending Owens classes this semester. The Office of Veterans Services, staffed by veterans and under the leadership of Tyler Emley, manager, provides support, resources and information to meet the unique needs of each student veteran.

Sherman is an Associate of Science-General Concentration major, with aspirations to transfer and pursue a bachelor’s degree and eventually become a constitutional attorney. He also has thought about serving others by entering politics.

He lives in Toledo with his son.