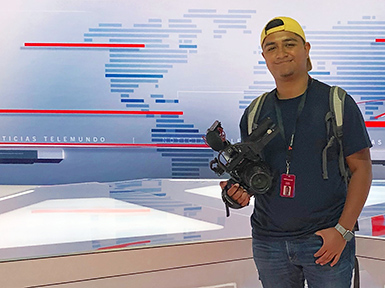 When Hanssel Martinez was 8 and growing up in his native Peten, Guatemala, his father gave him a small Panasonic video camera for Christmas.

“I fell in love with photography, editing and videos,” said Martinez, a 2019 Broadcast Media graduate who is now working as a social media producer and video editor for Telemundo in Miami.

“Since I was a child, I liked movies and TV shows and I was curious how they were made.”

Martinez, 25, immigrated to the United States in 2015, moving to Toledo with the Thamans, his “American family.” He said they “treat me like one of their children and we all treat each other like family. I have my real parents in Guatemala from the Martinez Guerra family and they feel very proud of me being able to reach my goals and dreams.”

He studied English for a year, attending class six hours a day at the University of Toledo. In Fall Semester 2016, he enrolled at Owens.

“The Broadcast Media program opens many doors for anyone who is passionate about video production, the entertainment industry, news, sports and broadcast,” he said. “The teachers at Owens are the best.”

With the assistance of the Fine and Performing Arts Internship Program and the Broadcast Media faculty, Martinez secured an internship at Telemundo from January-May 2019. He was hired following graduation in May.

His job responsibilities include editing videos for Telemundo’s social media and TV channels relating to breaking news, politics and entertainment. Millions of people consume Telemundo’s content daily, either on social media or TV.

One of Martinez’s recent special assignments was to create a celebratory video for Jose Diaz-Balart, the Cuban-American journalist and TV anchor for Telemundo, MSNBC Live and NBC Nightly News.

He had four days to condense Diaz-Balart’s remarkable 35-year career into a 90-second video that debuted for Telemundo’s leadership at a special event for Diaz-Balart, who’s won multiple awards for journalism excellence.

“A few minutes after the event started, they showed my video on a big screen. I was very nervous and excited because I didn’t know how the public would act,” Martinez recalled. “Then after the video ended, everyone … applauded for this man and his great career as a journalist. I felt very happy to see the reaction.

“After the event, my boss congratulated me and took me to meet Jose Diaz. She explained that I edited the video. Jose told me, ‘Thank you very much, brother! You have done an incredible job and I am very happy and grateful for this video that you have done for me.’ I was very happy to hear his words.”

Following the success of the Diaz-Balart video, Martinez said he received congratulations from many Telemundo producers who he had not met but then expressed an interest in working with him on future projects.

“The most exciting part of this story is that the video was so popular that the (Telemundo) executives decided to put the video on TV in the United States and throughout Latin America, during commercials in the news schedule. It feels like all of those long hours of editing were worth it,” he added.

Among other projects, Martinez also worked on promotional videos for the Latin America Music Awards (LatinAMAS), which aired in October.

Away from Telemundo, Martinez has his own production company, Sky Films, where he creates videos for businesses or special events. His most recent project was shooting a video for a yacht company in Miami, where he lives in a house with nine others, including two who also are from Ohio.

The people in Ohio, especially at Owens, are near and dear to Martinez.

“My advisors Annette Swanson and Andreanna Rivera and my teachers Rob Thomas, Dominic Gerome and Robert Ticherich guided me and helped me a lot,” he said.