Explore Careers Outside Your Window 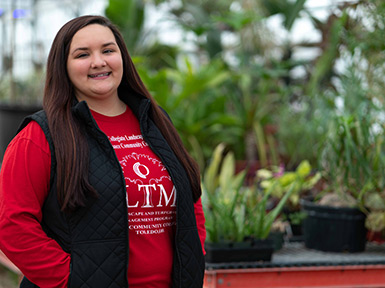 Landscaping and yardwork become immediate priorities in the Midwest in March following the long winter months.

To accommodate the need for service to residential homes, businesses or municipalities, the landscape industry hires approximately 300,000 men and women nationally every spring for careers that positively affect the environment.

According to the National Association of Landscape Professionals (NALP), these workers enjoy working outdoors with other people while earning a good living.

“You put in a lot of blood, sweat and tears – literally,” said Lexey Holub, an Owens Community College student majoring in Landscape Turfgrass Management. “You finish a job, you stand back and you can see the transformation. It’s like, Wow, I did that!

“I love being outside and the physical labor. I like knowing I did something (physical) that day,” added Holub, a 2014 Woodmore High School graduate who grew up in Woodville.

Salaries vary for landscape professionals and could range from $30,000 to $70,000 annually for full-time employees depending on position, experience and geographic employment location. Seasonal wages are determined by market as well.

Landscape professionals prepare their equipment during the winter months for when the weather allows them to get outside and begin servicing properties. In some areas, a severe workforce gap exists due to a lack of qualified candidates, whether it’s in landscaping or related industries such as agriculture or horticulture.

Holub, 23, worked a seasonal job at Schedel Arboretum and Gardens in Elmore all four years of high school. After graduation, she originally attended Ohio State University Agricultural Technical Institute before moving back home for health reasons.

She was working retail, but wanted to get back outdoors. One night, she applied online for several landscape jobs. The next morning, Stone Oak Country Club in Holland called her for an interview. She was hired immediately because of her arboretum experience and her ability to drive a truck, having grown up on a farm. She eventually was promoted to a managerial position.

“I didn’t expect to be called so quickly,” Holub said. “I started working there and I was blown away by the amount of things I was learning and how I could make this a career.”

At Owens, she’s president of the Landscape Turfgrass Club and has received five scholarships, including two from NALP. She said the personal attention in the classroom from the faculty, including Program Facilitator Chris Foley, helped prepare her for her career.

The event will take place in Fort Collins, Colorado March 20-23 this year.

“It was one of the best experiences I’ve ever had,” Holub said of networking with landscaping professionals and fellow students in North Carolina last year.

After a three-year stint at Stone Oak, Holub is starting a new job this month at Nil Gallagher Inc. in Berkey, where she will have the opportunity to become a landscape designer. She plans to graduate from Owens in May.