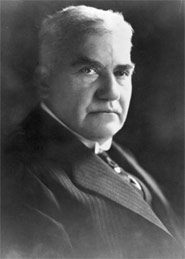 Owens Community College is named after Michael J. Owens, a Toledo inventor who changed the glass industry forever by mechanizing bottle blowing in 1903.

The son of a coal miner, he began his career as a glassmaker at the age of 10, stoking glass furnaces in Wheeling, West Virginia. Nearly twenty years later, in 1888, he came to Toledo to work for Libbey as a skilled glassblower. His Owens Bottle Machine introduced automation to glassmaking, in the process eliminating child labor and revolutionizing the glass industry, which had changed little in 2,000 years.

His work made it possible for thousands of jobs to be created and changed our community forever.

Michael J. Owens is also the "Owens" in Owens-Illinois, Owens Corning and Libbey-Owens-Ford. We are proud that the College bears his name.

Owens Community College began as a technical institute under the jurisdiction of the Ohio Department of Education. The first classes were offered in Toledo on September 13, 1965 with less than 200 students. Two years later, in 1967, the College was chartered by the Ohio Board of Regents as a technical college. In 1983, Owens Community College opened its Findlay-area campus at Cory and Davis streets.

In 1994, the College was chartered as a comprehensive state community college with a district encompassing Lucas, Wood and Hancock counties, and parts of Ottawa and Sandusky counties.